Address by the Grand Supreme Ruler

At this unusual and, for some, most difficult time, The Grand Supreme Ruler, Most Worthy Brother Andrew Christopher Sweeney, has been pleased to record some words of encouragement for you and all the Brethren of our friendly Order.

The video was recorded immediately before the 75th Anniversary of VE Day.

Address by The Most Worthy Grand Supreme Ruler 2019

Very dear Brethren all, may I extend a very warm welcome to you all and hope that you are having a very enjoyable day. The primary purpose of this meeting, as you know, is to confer honours on those brethren that have worked diligently and hard in the furtherance of the Secret Monitor both at home and abroad.

To those brethren who have been appointed for the first time I congratulate them on their progression and the hard work in their Conclaves and Provinces to date and hope that today serves as a catalyst for further advancement and development. For those that have been promoted it is a greater recognition of what they have achieved not forgetting that their contributions, particularly to developing and guiding the more junior brethren and in retaining members in our order, are of paramount importance. In both cases it is a reward that I am sure is much deserved and appreciated by their Masonic friends in their respective Conclaves and Provinces and by Grand Conclave.

I enjoin the active officers of the year to fulfil their duties with zeal and enthusiasm by embracing the opportunity with which they have been presented and will, as a result, look back on the year with satisfaction and fond affection as have, I am sure, the active officers who have retired today.

Everyone in Masonry, I am sure, looks back on certain milestones in their Masonic life and the receipt of Grand Rank is surely one of the most pleasurable memories, we all have. There are, of course, many others but one of the most significant is that of serving 50 years in an Order. Today we have such an occasion.

[R.Wy.Bro. Barrie Norman Collinson was presented with his 50 Year Certificate and Jewel and awarded a field promotion to P.G.Coun.]

Brethren, once again I am grateful for the support, advice and assistance received from the Heads of other Orders who I shall now introduce to you along with those brethren who are attending from overseas, and hope that you will give them applause at the end of the introductions.

We are pleased to welcome:

M.Wy.Bro. Paul Clement; Most Eminent and Supreme Grand Master of the Knights Templar – and our Immediate Past Grand Supreme Ruler.

R.Wy.Bro. Graham Flight; Grand Sovereign of the Masonic and Military Order of the Red Cross of Constantine.

R.Wy.Bro. Kessick Jones; Grand Master of the Order of Royal and Select Masters.

R.Wy.Bro. Tom Jackson; Grand Master of the Order of the Allied Masonic Degrees.

R.Wy.Bro. Ian Currans; Grand Summus of the Masonic Order of the Scarlet Cord.

R.Wy.Bro. Michael Herbert; Most Eminent and Reverend Grand Master of the Grand Priory of Knights Beneficent of the Holy City of the Rectified Scottish Rite of England and Wales and a P.D.G.S.R. – and thank you for acting as Assist.G.S.R. today.

Overseas Brethren from our own Constitution, from:

We also have a number of brethren from Grand Conclaves overseas.

Brethren M.Wy.Bro. Chellappa retires as G.S.R. next month and we all wish him well for the future, and although he may have retired, we still hope to have his company for many years to come.

Brethren I am again pleased to report that over last year the number of members has increased and that some of the initiatives that have been developed in the Mark with respect to recruitment and retention are now starting to be shared across the other orders with positive effects. There has steadily been an increase in communication from Mark Masons’ Hall via Facebook, Twitter, and through the website and also an emailed newsletter, Freemasonry@86News has been sent out at a Provincial level with positive feedback and will shortly have increased direct to member circulation.

The active Grand Officers have been busy during the last year with the installation of 6 new Provincial Grand Supreme Rulers who I congratulate and invite to stand when their name is mentioned.

During the year I made four very happy and well attended visits to Conclaves, the last one for the centenary celebration of The Verney Clayton Conclave No.45 in Cheshire and North Wales, the first centenary since 2010.

We also had the pleasure of consecrating two Conclaves, one in Zante and the second in Malta, where we also undertook the Induction and Princes ceremonies.

R.Wy.Bro. Charles Aspinell, P.Dep.G.S.R. has retired from that office today after 4 years of very dedicated service to the Order. He was installed as Dep.G.S.R. by my predecessor in 2015 and on my appointment, having received loyal service from him in the Scarlet Cord was more than happy to reappoint him. I now thank him on behalf of Grand Conclave, and also personally, for all the support, advice and friendship he has shown whilst fulfilling his duties.

Also retiring from office after 10 years of loyal service as President of the Executive Committee is R.Wy.Bro. Malcolm Slater.

I thank the Grand Director of Ceremonies and his team for all the work they have done, both during the year and for this meeting, and on behalf of all the brethren I thank the Grand Secretary and all his staff for the very dedicated work they do in the administration of the Order and in continually trying to improve both the administration and communication for the Provinces and Conclaves.

Very dear Brethren, the vast majority of you have travelled long distances to be with us today and I thank you all for giving up your time to contribute to the success of this meeting by supporting the recipients of honours today.
I wish you all a safe return home and trust that you and your families will soon enjoy a happy and peaceful festive Christmas season and that 2020 will bless you with good health, happiness, and success as we take this order forward into the next decade.

Warwickshire Sponsored Slim for the OSMBF

R.Wy.Bro. Trevor Cavill, Prov.G.S.R. for Warwickshire, and Wy.Bro. Neil Watkin, Prov.G.Rec. and Dep.Prov.G.S.R. Designate, have embarked on a Sponsored Slim to raise donations for the OSM Benevolent Fund.

With the help of the Provinces of Durham and Devonshire, and individual donations, they have now raised nearly £600 towards the OSM Benevolent Fund since 15 June - plus both have already lost weight; Neil has lost half a stone, and Trevor has managed a massive loss of over a stone!

Anything donated to this effort goes to Mark Masons' Hall in the name of the Province or Brother donating, and it helps to encourage Trevor and Neil lose weight. The OSMBF will in turn use this money for charitable grants and match funding to help projects in your area.

Our hearty congratulations to Trevor and Neil, and to all those who have donated or pledged support - especially to Durham and Devonshire who have given fantastic support through their generosity. 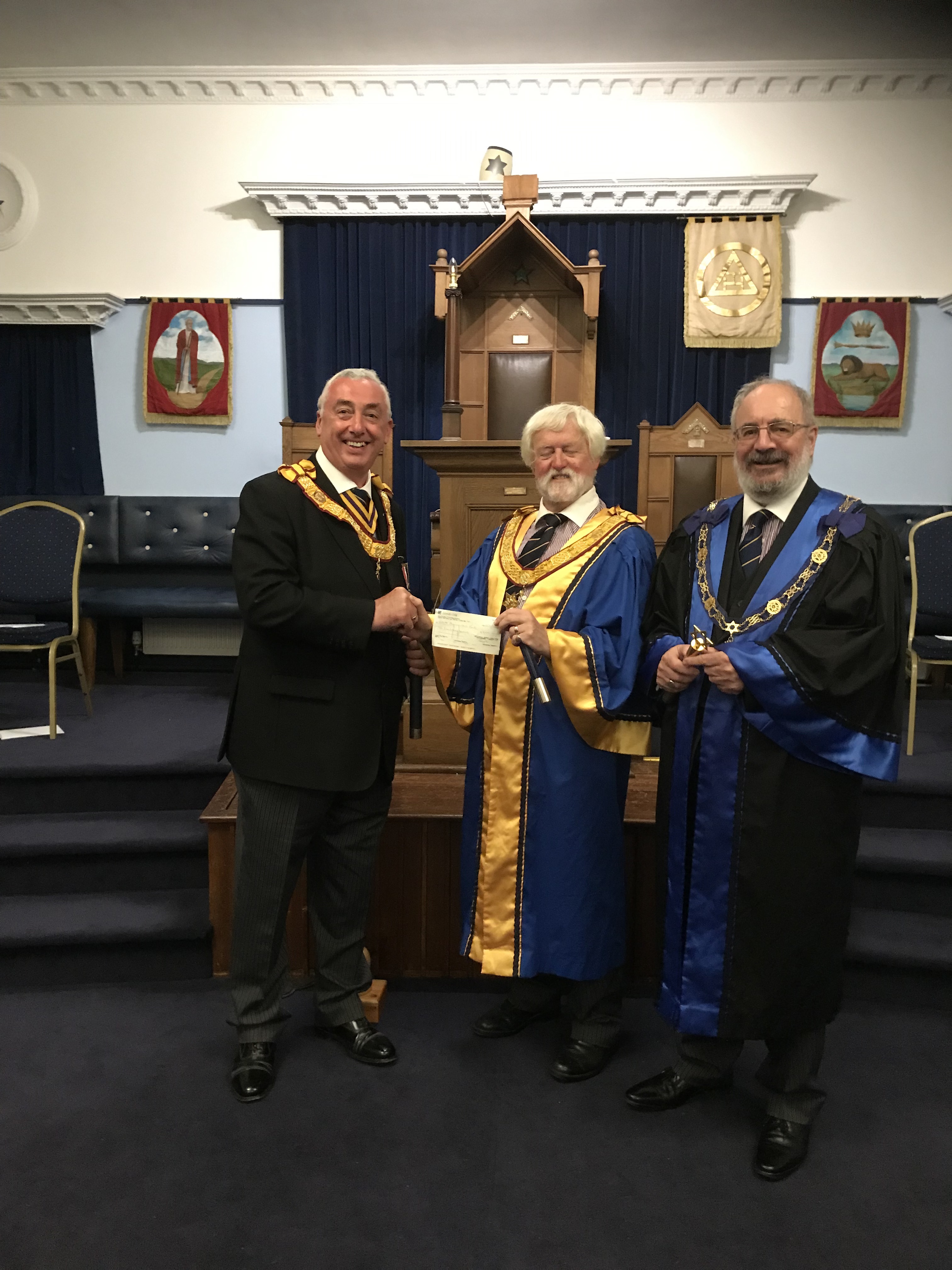 R.Wy.Bro. Trevor Cavill being presented with a cheque from R.Wy.Bro. Roger Guest, Prov.G.S.R. for Devonshire, and his Dep.Prov.G.S.R. John Whitfield last Saturday at what was a fantastic Provincial Meeting in Plymouth.

If you would like to help support Trevor and Neil in their efforts, you can Download a Sponsorship Form Here - all donations will be gratefully received.

Keep up the good work Brethren!