What’s the sum of one Provincial and two District Grand Summi?

That’ll be the Kolkata marathon 2019, when R.Dist.Comp. Geoff Gill (Province of West Lancashire), R.Dist.Comp. Krishnamchari Gopal (District of Southern India), and R.Dist.Comp. Stephen Hindes (District of Western India) donned the glorious robes of the Scarlet Cord (rather than running vests) for an incredible marathon of Freemasonry - the Consecration in the historic Freemasons' Hall, Kolkata of three Consistories (Calcutta, Eastern India and Bengal) in one day.

Starting at 9 a.m. on Saturday, 16 November 2019, they finally ceased labour at 9 p.m. to receive their well-earned refreshment. And just in case there was any doubt, and to underline his stamina and fortitude, R.Dist.Comp. Stephen Hindes capped it all with the Consecration of Mount Zion Rose Croix Chapter. 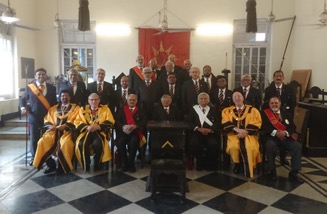