Address by The Most Illustrious Grand Master - 2018

Companions, I welcome you most warmly to our Annual meeting of Grand Council. I am delighted to see such a splendid attendance, being especially conscious of the fact that many of you have travelled great distances to be here, and of course have to get back home afterwards. I thank you for that, and look forward to further sharing your company at our celebratory luncheon later.

I begin my address by congratulating all those whom I have invested as this year’s Grand Officers, or whom I have promoted or appointed to Past Grand Rank. Both promotions and appointments carry with them additional 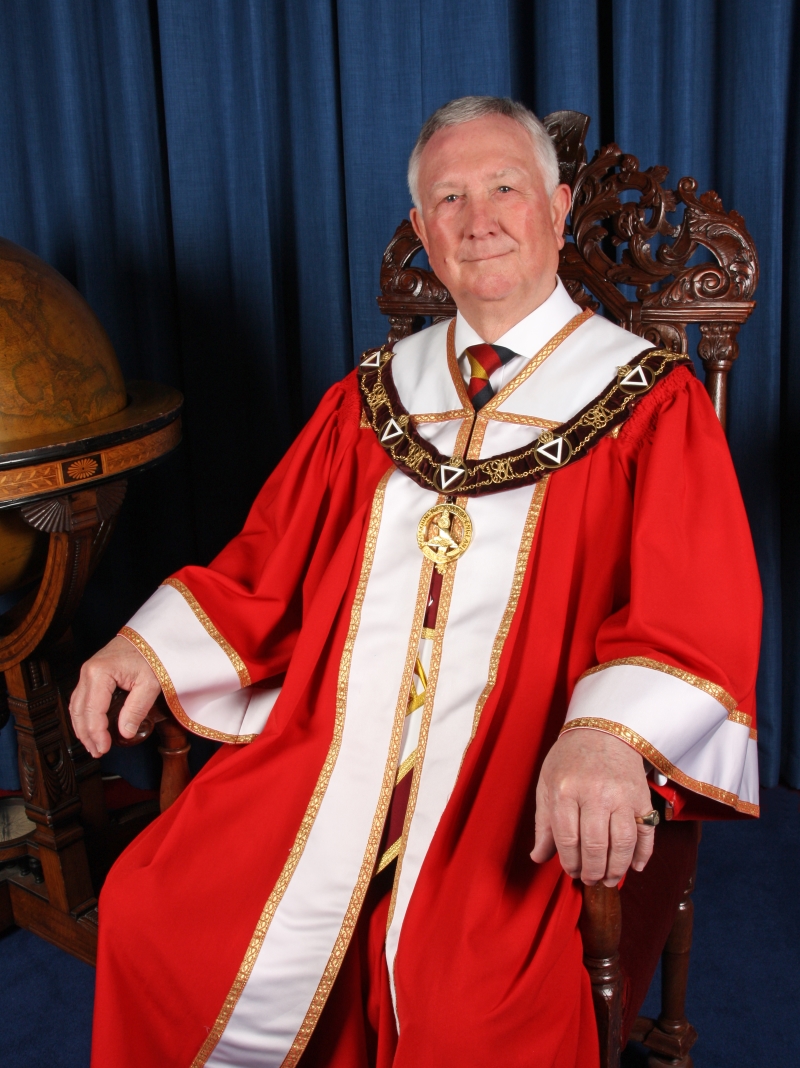 responsibility as well as new dignity and I wish you all good fortune, and I am confident, that you will continue to increase your efforts in championing every aspect of Cryptic Masonry. In underlining this, and with the kind permission of Michael Herbert, I will steal a phrase from the SMSA Ritual – meliora praesumo – I look for better things to come.

So I urge the new Grand Officers to keep up the momentum, dispense light and instruction to your junior colleagues, continue to set higher standards and reflect upon this – If the sky’s the limit – then why are there footprints on the moon!

Very shortly I intend to give you a brief snapshot of our joint activities during the past year, which have been quite considerable. During all of these activities I have been loyally supported by a diligent and enthusiastic Team of Active Grand Officers. Headed by the Deputy Grand Master and the Grand P.C.W., they have all performed their individual roles to great effect, but at the same time acted as an integral part of a Team. This Team have carried out many ceremonies in various parts of the country, often travelling at their own personal expense. These occasions have proved to be of great satisfaction to our various hosts and of course to my personal delight. I emphasise the importance of the Team ethic by quoting a little-known writer named Vesta M. Kelly; she said “Snowflakes are one of nature’s most fragile things – but just look what they can do when they stick together!”.

Now back to that snapshot. I have consecrated six new Councils since we last met. These were:
In Newark in the District of North Midlands, Shiney Row in Durham, Bristol in the District of Somerset and Wiltshire, Ealing in Middlesex, and two in London, one of which was for our Companions in Belgium. On 23 May, there will be another in the District of North and East Yorkshire. There are also further Consecrations already in the planning stages which will take place later in the year.

I also installed 3 new District Grand Masters and I will now ask them to stand and be recognised as I introduce them. In July last year I was privileged to Install R.Ill.Comp. Martin Wilson as Dist.G.M. for East Midlands in consequence of the retirement of R.Ill.Comp. Michael Jolley.

In August, I had the pleasure of installing R.Ill.Comp. Jeremy Shaw as Dist.G.M. for Dorset, Hampshire and Isle of Wight, following the retirement of R.Ill.Comp. George Deacon.

And in early September I was pleased to Install R.Ill.Comp. Michael Graham as Dist.G.M. for Durham after the retirement of R.Ill.Comp. Denny Wilson.

During my introductory preamble at all those Installation Ceremonies I spoke highly of the industry, endeavour and achievements of those outgoing District Grand Masters and I now echo those plaudits in order to thank them for the valuable legacy they have left to their successors.

The new kids on the block appear to have settled in very well and I wish them every success and happiness in their new responsibilities.

The Silver Trowel and Excellent Masters degrees are as popular as ever and still eagerly sought. The rapid expansion of Silver Trowel is now being served by additional Councils of Installed Masters geographically spread in certain Districts in England and Wales, together with our Inspectorate of Jamaica and the Cayman Islands and I am indebted to them for conferring this degree on my behalf. Especially as the Office of King David is very important and should only be carried out by Companions who are accomplished in the delivery of that part of the ritual. I am most grateful to the members of Grafton Council of Anointed Kings No. 16 who have maintained their expertise in the Silver Trowel from those early times to the present day, and continue to confer this degree on Candidates from London and the Home Counties. Incidentally, the person whose organisational skills so enhanced the early beginnings of that Council, V.Ill.Comp. Trevor Currans, was installed as the 9th T.I.M. of that Council in February, and we wish him well. Grafton Council will still bear sway with the Excellent Master’s Degree. Following our successful ‘away fixture’ last year, and after throwing out the challenge during my address in 2017, further ‘Outreach’ programmes are planned for Leeds and Chester respectively in May and July. Such outings will bring certain logistical challenges surrounding the transportation of specialist equipment, but I understand that the Grand Sentinel is in the early stages of negotiations with “Eddie Stobart”! It is anticipated, that at these meeting the members of Grafton will be assisted by the talents of local Companions. In addition to all this and in furtherance of our strong relationship with the Mark, we are planning a programme which will enable the remaining duly qualified Mark Prov.G.M.s that have not yet received the Silver Trowel and Excellent Masters, to do so en bloc. But Companions – would you believe that there are still one or two Mark Prov.G.M.s yet to join our Order! Perhaps a little subtle pressure within the relevant Provinces might help resolve this peculiar anomaly!
On a statistical front I can inform you that since last year’s Grand Council meeting 103 Companions have taken the Silver Trowel and there have been 52 Candidates for the Excellent Master’s degree.

Continuing on that theme I am happy to report that during the past year the Order as a whole has made steady and measured progress. At the Dist.G.M.s’ Conference at the end of January I was pleased to report that we had achieved an increase of 2.69 % in membership and 0.39% growth in members. I was privileged to visit Keith Hind Council during the year. When in October I travelled to Byker, to witness a first-class conferral of the Royal Master degree performed by a team from the District of Northumberland in which their Dist.G.M. equipped himself very well in an admirable performance of P.C.W.

On the subject of Dist.G.M.s and my Grand Inspectors, I must thank each and every one of you, not only for your attendance today and for those who formed the Escort so well, but for your unstinting support and energy in the superintendence of your units throughout the year. As I said at your Conference you are the ones that make it happen, so please keep doing it.

I also said the following, which I will now repeat as you deserve the kudos that Theodore Roosevelt’s words contain when he said: “The best Executive is the one who has the sense enough to pick good men to do his work – and the self-restraint to keep from meddling with them while they do it”.

I am also heartened by the presence of many Past Dist.G.M.s here today, still actively supporting the Order and no doubt still keeping a watching brief on their successors.

One of the most delightful aspects that the year 2018 brought was the Inaugural Portal Lecture delivered in his inimitable style by R.Ill.Comp. Jim Daniel, P.G.Coun., at M.M.H. at the end of January. Those of you that were fortunate enough to be present, will remember that during the many plaudits offered in connection with Canon Portal’s philanthropic life and his early endeavours to launch a Mark Benevolent Fund, passing reference was made to his connection with the Royal and Select. Allow me to briefly qualify, Canon George Raymond Portal was indeed our first Grand Master and served in that office from 1871 to 1889.

I consider that one of the greatest privileges of this job is to see my name in the same Column as his, on page 146 of our Year Book. Albeit, he is at the very top and I am at the very bottom!

Companions, you will all be aware of the prerequisites for membership of this Order. Thus it is essential that we do all we can to keep our Craft Lodges and Royal Arch Chapters vibrant and relevant. We must see that the ritual and ceremonial in our Lodges and Chapters is performed to the best possible standard. This will ensure that Candidates get an early grounding of the development and expansion of the legend of the Temple following the death of Hiram Abif. There is then a tangible possibility that they will be ready and eager to make a daily advancement in their Masonic Knowledge of the Temple legend by joining this truly beautiful Order.

In conclusion, you will all by now, be aware of my fondness for quotations.

So, I will leave you with one thought voiced by another little known literary figure named Alex Noble who once said: “If I have been of service, if I have glimpsed more of the nature and essence of ultimate good, if I am inspired to reach wider horizons of thought and action, if I am at peace with myself – then it has been a good day”.

Companions, I have had a good day, no I have had a brilliant day and hope that you have too. Continue to enjoy your Cryptic Masonry, it is very special, please keep it that way.

Finally, Companions – Be of one mind, live in Peace and May the Supreme Master of the Universe delight to dwell amongst you and bless you for evermore.