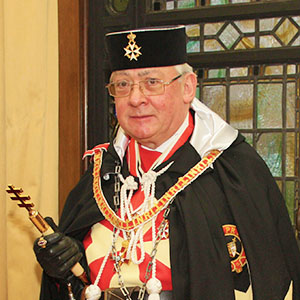 The historic “Knights of the Order of St John of Jerusalem” (Knights Hospitaller) were founded in Jerusalem during the first Crusade, about the year 1099, by the association of many pious Knights with the Brothers of St John’s Hospital, which had been founded earlier that same century, for the relief of pilgrims travelling to worship at the Holy Sepulchre.

In Masonic terms, the Malta Degree is conferred on Candidates who have already been Installed as Knights Templar. Whilst the regalia and ceremony are very different from that of Knights Templar Freemasonry it is not a separate sovereign body, rather a progressive Degree within the Order of the Knights Templar; hence the full name of the Great Priory being “The Great Priory of The United Religious, Military and Masonic Orders of The Temple and of St John of Jerusalem, Palestine, Rhodes and Malta of England and Wales and its Provinces Overseas”.

The ceremony is based on the movement of the Knights Hospitaller from their inception in Jerusalem, to their settling on the Island of Malta in 1522 (having travelled via Palestine and Rhodes), where they would remain in control for some 270 years.

The Masonic ceremony of Installation of a Knight of Malta is a very colourful one which includes moments of drama and historic background. The Rank structure within the Degree is similar to that of the Knights Templar with a few slight differences. The Officers titles are very different and unique to the Degree.