R.E.Kt. Hearl Lenton was Installed as Provincial Prior for West Yorkshire by the M.E. & S. Grand Master Paul Clement, G.C.T. at the Castle Grove Masonic Hall in Leeds on Saturday.

Castle Grove Masonic Hall in Headingley, Leeds was fully packed on Saturday, 26 October to support the Installation of R.E.Kt. Hearl Roger Lenton (formerly Deputy-in-charge) as the new Provincial Prior for the Province of West Yorkshire.

The twenty-four Preceptories of the Povince proudly paraded their respective banners (several representing Preceptories over two-hundred years old!) before the Grand Master, who then went on to Install R.E.Kt. Lenton as the Provincial Prior of West Yorkshire. The new Provincial Prior in turn Installed V.E.Kt. George Antony Ryder Wilkinson to be his Provincial Sub-Prior. It was a wonderful meeting followed by excellent festivities in a warm atmosphere.

We wish R.E.Kt. Hearl Lenton, V.E.Kt. Tony Wilkinson and the Province of West Yorkshire our very best wishes for a prosperous future. 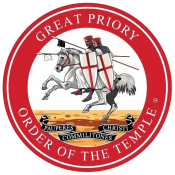