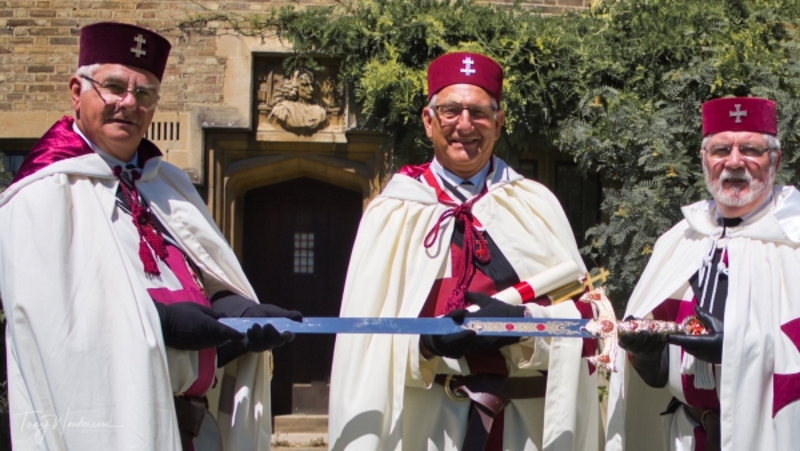 On Saturday 30 June 2018 Knights from across the Province of East Anglia converged on the Cambridge Masonic Hall, Bateman Street, to celebrate the Sesquicentenary of Tancred Preceptory No. 102.

There they were joined by Most Eminent and Supreme Knight Paul Raymond Clement, Grand Master, and his accompanying Great Officers; and Right Eminent Knight Stewart Charles Lambert Middleton, Provincial Prior, and several of his Provincial Officers.

In what was a full agenda, in an equally full Temple, the Provincial Prior presented the Eminent Preceptor, E.Kt. David Bowman, with the Sesquicentenary Sword (pictured above) which had been generously donated by E.Kt. Terence C. Lewis, P.Gt.Chamb., Preceptory Registrar.

Following this, the Eminent Preceptor and his team of Officers proceeded to Install Nicholas Self as a Knight of the Order in splendid fashion.
The Knights present were then treated to a history of the Preceptory from E.Kt. Lewis and an Oration from V.E.Kt. Dr John A. Elmore, P.Gt.Reg., Provincial Prelate, both of which were insightful and fascinating.

The climax to the meeting then came as the Most Eminent and Supreme Grand Master presented the Eminent Preceptor with the Sesquicentenary Certificate.
Before retiring from the Preceptory the Most Eminent and Supreme Grand Master had one last duty to perform. He was pleased to promote E.Kt. Lewis to the Rank of Past Great Herald in recognition of the hard work and devoted service he has given to the Preceptory, the Province and the Order in general. This evidently came as a complete surprise to E.Kt. Lewis and was warmly received by the Knights present.