Consecration of the John, Baron von Hoff Conclave No. 527 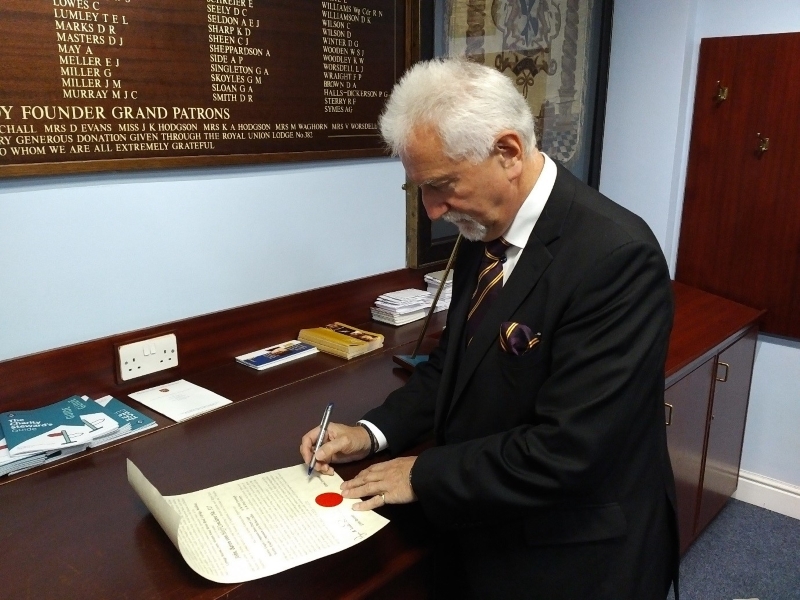 M.Ill.Kt, Graham Leslie Flight, G.C.C., Grand Sovereign, signs the Warrant of the newest Conclave in the Order of the Red Cross of Constantine.

On Monday 4 June 2018 M.Ill.Kt, Graham Leslie Flight, G.C.C., Grand Sovereign of the Order of the Red Cross of Constantine, accompanied by his Deputy, the Grand Eusebius and a retinue of Grand Officers, visited the Uxbridge Masonic Centre to Consecrate the newest Conclave of the Order, the John, Baron von Hoff Conclave No. 527.

Prior to his death in 2016 John, Baron von Hoff was a leading light in the Grand Sepulchre Guard of the Order. His reputation was legendary and he was responsible for many of their traditions, as well as designing the distinctive Mantle that members wear. Naming this Conclave in his honour is a great tribute indeed and the Grand Sovereign, R.Ill.Kt. Dennis Leigh (Intendant-General for Middlesex) and the rest of the Founders and visitors were delighted to be able to welcome Pauline, Baroness von Hoff as the guest of honour at the after-proceedings.

We have 192 guests and no members online