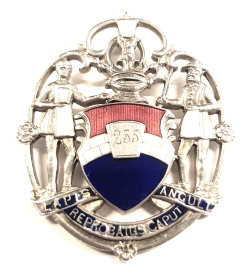 When the original Keystone Fund was established on the 3rd June 1930, it was on the basis that it would only apply to the Mark degree. Such was the enthusiasm of other Orders being administered by Mark Masons’ Hall that in 1933 it was extended initially to the Knights Templar and it was agreed that a special ribbon could be worn by “Keystone Preceptories”. Eventually this arrangement was extended to all the other Orders. The primary purpose of the Fund was to help finance major capital projects to improve the fabric, facilities and quality of Mark Masons’ Hall.

The new 150th Anniversary Jewel will compliment, not supplant the current Keystone Jewel which is worn with great pride by many Members of the Mark degree.

Newly qualified Members, Lodges, Provinces, Districts and Inspectorates receive an entirely new Jewel of the prescribed design, whilst current holders of the original Keystone Jewel may retain their Jewel and add the 150th Anniversary button on the ribbon/collarette.

Qualified Lodges, Provinces, Districts and Inspectorates are encouraged to display on their respective circulars, both of the honorifics, e.g. Keystone Lodge and 150th Anniversary Keystone Jewel.

The current levels of qualifying contribution are:

The current cost of the Jewels are:

The levels of contributions and the Jewels are the same for all Orders, the only difference being the colour of the ribbon/collarette from which the Jewel is suspended:

The Fund, as well as financing major capital projects (i.e. additional air conditioning) and enhancing the value of the building (i.e.renovation of the stonework), is also a long term, tangible commemoration of the 150th Anniversary of the Founding of the Grand Lodge of Mark Master Masons’.