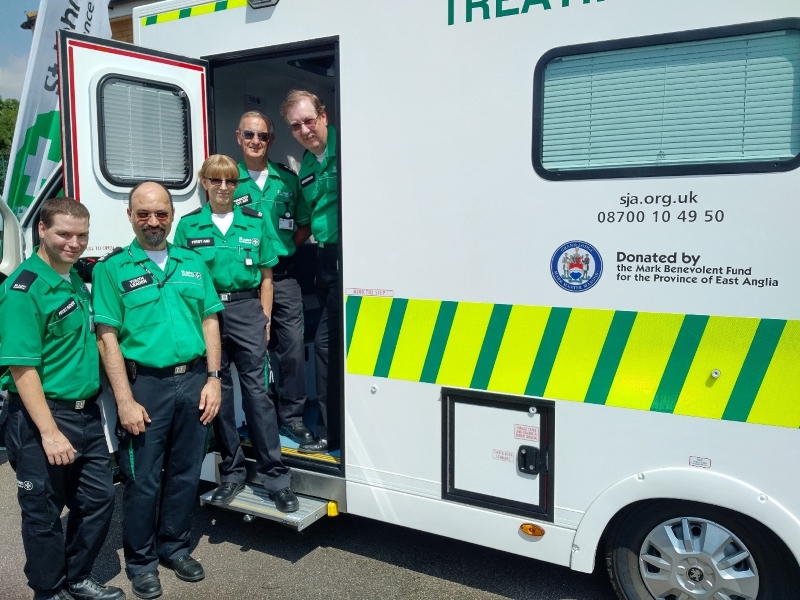 The sun shone down with meridian splendour as we arrived at Huntingdon’s St John Ambulance headquarters for Cambridgeshire.

There, representatives and volunteers from St John Ambulance were joined by the Deputy Lieutenant of Cambridgeshire, the High Sheriff of Cambridgeshire and the Dean of Peterborough Cathedral to be formally presented with the keys to the new Mobile Treatment Centre by Right Worshipful Brother Paul Anthony Norman, Provincial Grand Master of the Provincial Grand Lodge of Mark Master Masons of East Anglia.

The Treatment Centre had been delivered 6 weeks previously and in that short period had already been in service at 25 events within Cambridgeshire.
This is the second of three vehicles being presented in the Masonic Province of East Anglia, which comprises the geographical counties of Norfolk Suffolk and Cambridgeshire. Norfolk received theirs in May and the Provincial Grand Master and his team of Provincial Officers will head to Suffolk later this year to present the remaining vehicle.

The volunteers at St John Ambulance were delighted to be in receipt of the vehicle and can’t wait to get their turn at taking it out to one of the many events that they attend across the County.

After the presentation we were treated to early afternoon tea and sandwiches and it was a pleasure to meet and talk to the volunteers and hear what a difference a vehicle like this will make. Their enthusiasm for their duties as first aiders is quite enlivening.